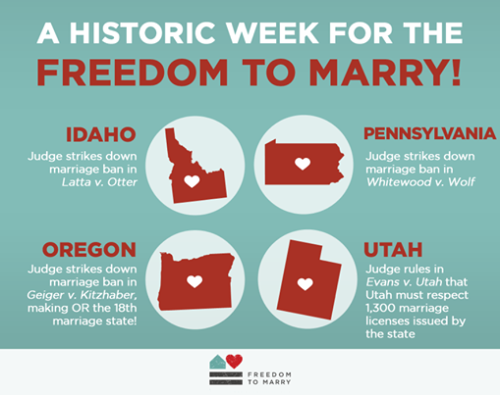 So it’s been a great week in regards to legalizing gay marriage, but it’s also brought out the bigotry in people, and I’m not just talking about wanting to deny someone the right to marry the person he/she loves. I’m talking about the type of bigotry that doesn’t recognize sexuality or gender identity as a personal thing: being homosexual is a sin, being transgender is a sin, both things are a choice, being transgender doesn’t exist, and so on and so forth.

I constantly have battles about sexual and gender identity on my FB page. I’m not even posting anything controversial. In fact, I shared the above image on my FB page, thinking it was going to be a nice way to support how happy I was for this, only to invite a storm that dared to compare homosexuality to pedophilia and beastility, and that I accept certain sexualities and condemn others (pedophilia and beastility!). Sometimes the argument also devolves into crying out that gay marriage is special treatment! There is also another argument stating gay marriage is setting a dangerous precedent, when my PA told me gay marriage has been legal in Canada for over a decade, and Canada is still intact and has not even thought about legalizing pedophilia or bestiality! One person even dared bring up some man boy love association being glad about gay marriage. I don’t even know why they would be because a man loving a boy in that way is not homosexuality. It is pedophilia. Such conversations about sexual and gender identity always turn this way on my Facebook page, and I get angry and frustrated, especially now that I’ve identified as asexaul; asexuals CAN face the same oppression homosexuals face, ESPECIALLY if you identify as asexual homoromantic or biromantic or panromantic and are engaged in a romantic relationship with the person of the same sex or gender. Even just outright asexuality can bring upon oppressive words and actions. Corrective rape also occurs against asexuals. People argue this is about misogyny, but corrective rape is corrective rape, the idea that you can change that person’s sexuality by raping this person.

So my PA, Mariah Wilson, found this wonderful article titled “Is every christian against gay marriage necessarily a bigot?”

The answer is yes.

This article argues that it’s not a person’s beliefs that make that person a bigot, but the actions. If you vote against gay marriage, preach against gay rights, support anti-gay movements, even just talk about how you’re against gay marriage, you are a bigot. I also think that if a heterosexual person thinks homosexuality is a choice, that person is a bigot, as a person’s sexuality is a very personal thing, and no one has any right to tell someone that person chose to be that way. I know I didn’t choose to be asexual. I can’t force myself to experience sexual attraction in spite of having a healthy libido. I just can’t. I never have. I don’t have sexual fantasies. I don’t guy scope. I’ve always felt romantic attraction and never once put sex in the equation, even though I knew I was probably eventually going to engage in it. I don’t even look at my fiance in a sexual way in a moment where I’m probably supposed to, and sex is 0% important in a relationship for me. In fact, if I could go the rest of my life without sex, I would be just dandy, but, as it were, I still enjoy it and my fiance is a sexual person. And it has nothing to do with him, because I’ve never felt this way about past boyfriends, either, even ones who broke up with me when I was still in the puppy-love stage. So it’s frustrating to hear people claim homsexuality is a choice, because I GET IT NOW. I always knew it wasn’t a choice, but I get it 10x more now that I’ve identified as asexual.

People also think lacking a libido means you’re asexual. NO IT DOES NOT. Lacking a libido is lacking a libido in a sexual person and can present other health problems that need to be checked out by a doctor. Not to mention a sexual person tries to fix this lack-of-sex-drive problem. If I suddenly lacked a sex drive, I wouldn’t even try to fix this problem, unless I began to notice other health issues, with lacking a sex drive just being a symptom of those issues. Otherwise, I just don’t care about sex, and I can’t force myself to care about it. When I once told my mom I was never going to have sex, I probably would have meant it if sex weren’t an important factor in a relationship for some people. But I realize that sex is, and I love my fiance enough to not want to deprive him of something that he feels is important, especially because it’s a very intimate thing to him–and it is for me too! It’s just not something that I need to express intimacy. I would rather cuddle or bake a cake with him or do something else with him that doesn’t involve sex, because these are my ultimate expressions of love.

So sexual identity is a very personal thing, something no one has a right to judge or dictate or what have you. Even so, I can at least take comfort in knowing that, one-by-one, each state is legalizing gay marriage, and so those who are bigots are eventually going to be left behind in their own frustrations. But I can only hope they eventually forgive the inevitable and move on to more important matters that don’t involve someone’s personal sexual identity. Or look to their god and realize that gay marriage happened for a reason. I have one friend, who is a Christian, who thinks God wants gay marriage to happen for a reason, whatever that reason is. And that reason doesn’t matter to her!

Now on to the point about pride. 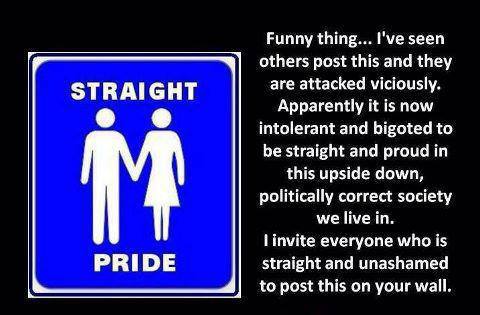 I found this on my FB feed from some right-wing FB page. I just want to state that it’s fine to take pride in your heterosexuality, but this picture is the epitome of ignorance among the LGBTQ+ community. Straight people don’t need to announce or celebrate pride in their sexuality because their sexuality is celebrated daily. Look at the media. Look at what every product is aimed at. Look at movies. Look at video games. Just look everywhere and you can find some sort of expression of straight pride that doesn’t outright scream straight pride.

Straight people who post this are attacked because they have never faced systematic oppression for being straight. Yes, heterophobia and cisophoba do exist. I’ve seen it on Tumblr. I have seen people from the LGBTQ+ community point this out. But that is Tumblr, and if this were posted on Tumblr, you can bet it would be attacked, even by those who recognize the existence of hetero and cisphobia.

Pride parades, pride whatevers, exist because those who are not heterosexual or cissexual have never been shamed for not being these things. Those in the LGBTQ+ community have a history of being ostracized, bullied, murdered, raped, and denied certain privileges. For crying out loud, this is the Civil Rights issue of our generation! Posting a picture like this is like saying you’re colorblind when talking about race. You’re completely wiping out an entire history of oppression against those who are not white.

So in order to reconcile with the fact that we are not part of heteronormative standards, we have to find some way to be loud about who we are. Thus, we have created our own flags to display our pride in our sexualities or gender identities. In fact, I just bought a button pin with a cat head colored in the asexual stripes because a black ring is too subtle to show my pride in my asexuality. I have to have pride in my asexuality. Asexuals experience erasure, even among those in the LGBTQ+ community, as people have a hard time believing that anyone can be non-sexual. Some people also believe those who are asexual were raped or molested. And we need to show people that asexuality is a real thing, that we aren’t subhuman, and that we didn’t choose to be this way, especially in a culture obsessed with sex.

I also have not fully come out about my asexuality, because I am afraid people will not understand. I am also afraid my fiance will take offense to this, will think he made me this way, or that I just don’t love him. These are real fears to me, and so this straight pride crap denies my fears.

When a picture like this is posted, it ignores all of this, ignores why we have to take pride, why we have to be loud and proud about it. It’s a slap in the face to why the LGBTQ+ community exists in the first place.

Until straight people start experiencing systematic oppression or are are seen as ‘other,’ only then can they start making their own flags or posting pictures like the one above. For now, it is not the right of a straight person to do this. That straight person is impeding on the voices of those who aren’t straight, is impeding upon their space, and that is not okay.

One thought on “Sexual Identity and Pride”