If you’ve read my previous post, I’ve already written about this on Tumblr, but I also think it begs repeating on here.

Asexuality is complicated because, as a friend of mine who is sexual put it, “not being sexual is perhaps among the least socially acceptable preferences in our hyper-sexual society.” This isn’t to say asexuals are oppressed–at least, not that I’m aware of–but it is to say that being asexual is an anomaly. When people hear of asexual, they think of a thing that reproduces on its own. People are also very adamant about the importance of sex in a relationship and don’t understand there are those who are actually rather ambivalent about it. Asexuals can enjoy sex, but, if asked to push a button for cake but for the rest of your life no sex, we’d all push the cake button. People also don’t think of it it as a sexuality that follows under the ‘Q’ category of LGBTQ. There is an ‘A’ involved in this LGBTQ thing that does not stand for ally but actually asexual, which is apparently very confusing for A LOT of people. Notice that they believe the A means Allied, which is why I prefer to keep it in the ‘Q’ for now:

Asexual simply means a lack of sexual attraction, even when you are in a relationship with someone you love; thus, I am asexual heteroromantic, because I want to be in a relationship but I don’t see sex as important and don’t particularly care for it, even though I do have a sex drive and can enjoy it. There is also homoromantic and biromantic, and probably a few other ones. But you don’t find people sexy.

My fiance once admitted to me he does find other women sexually attractive, but, obviously he’d never cheat on me. I was very offended the first time I heard this, and I told him so. He then told me I likely looked at other guys the same way–but I didn’t and don’t. However, I obviously accept that part of him, because I trust him enough to know he’d never hurt me.

I don’t look at a guy and go, “Yum. I can so imagine doing you, even though I am engaged. I wouldn’t, but I’ll file you away as a fantasy for another day when I’m by myself taking care of some, you know, business.” You can find people aesthetically pleasing, but you never look at them as someone you can see being sexual with–or someone you can even fantasize about. In fact, the thought often disgusts you. The thought of having sex with anyone but your partner is sort of gross. At least for me. I don’t want to paint a broad brush over all asexuals.

If you do care to take care of your sex drive, you’d rather do it on your own, but you don’t fantasize about anyone, not even your partner. Sometimes you will do it with the person you love, not out of sexual attraction, but for a variety of reasons: to take care of your partner’s needs, the sheer intimacy that is involved, or just the physical feeling itself, but you don’t associate that feeling with anything sexual. It’s just a feeling to you, like someone rubbing your back or brushing your hair–just a thing that feels nice. You also have sex much less often than your average person, which leads many to believe there is something biologically wrong with you and that you need to see a doctor or something. No. We do have a sex drive. We just really don’t care to have sex that often. Again, we’d rather be doing anything but that.

But the reason I’m coming out now is because this is something I recently discovered myself. Asexuality is always something that has been a part of me since I launched into my mid-teens, when you toy with the idea of sex. I was toying with it, but, even then, I felt I was never going to actually have sex. I knew I wanted to be with someone, but I never put sex into the equation. I just thought that if I said, “Hey, sex isn’t that important to me,” my imaginary boyfriend wouldn’t care. But now I know better, because for a lot of people who are sexual, if there is a lack of desire for sex in the relationship, that relationship starts steering into dangerous waters. Thankfully my fiance at least knows sex isn’t that important to me. I don’t think it’s a big deal to him, but he’s still a sexual person. I just recently started doing research on it because of a few things my fiance has said, not begrudgingly, but matter-of- factly. He’s said it a couple of times before, but I finally decided to take it into my own hands, because I didn’t feel there was a dysfunction in me.

en or sixteen when I joined Gaia Online. I frequented the relationships forum, just because of the asexual thread. It was an interesting concept to me. At the time, I thought asexual simply meant that you didn’t want sex and you didn’t want to be with anyone, because I remember seeing that just about everyone on this thread was that way. But a lot of people who weren’t asexual didn’t understand this at all. I was with the asexuals, trying to argue that sex shouldn’t be the thing that makes or breaks a relationship. The sexual people were arguing that it was, and that we would never find anyone if we didn’t force ourselves to become interested in it. They thought asexuality was a myth, that it wasn’t real, that we were just immature, or that we just chose to abstain from it, or, laughably enough, remain celibate. Then there were some who thought we shouldn’t exist because we contributed nothing to the gene pool, when, really, there are asexuals who have children. And, believe it or not, there are Christians who do believe asexuality is a sin because of the whole ‘be fruitful’ thing.

But you don’t hear this line of thought often because asexuality is invisible, even in the LGBTQ community.

I just wasn’t thinking anything at the time about having sexual relationships with anyone, and I thought this was simply normal for my age. You can argue it was, but eight years later, and I’m still thinking the same thing. Of course now sex is no big deal to me. I compromise, but it would be embarrassing to explain to a sexual person how often it actually is for me.

Some couples, who aren’t asexual, do struggle with their sex lives, but often one or both parties is no longer interested because he or she is no longer interested in his or her spouse. Or their could be some type of sexual dysfunction with one partner. Or one or both partners is just too tired at the end of the day from a long work schedule. Or they just need to mix their sex lives up a little bit, because doing the same thing for too long can get boring. Even so, both partners may be absolutely frustrated about their sex lives and have no clue what to do. Asexuals don’t have that frustration. Our only frustration is that people don’t understand that we don’t care for sex, that we aren’t ill, that we aren’t flawed. It is wired into OUR biology. We do not CHOOSE to be this way. And we can’t get ANYONE to understand that.

Sex is just not a big deal to us. Hello! Cake!

Let me explain to you my relationship with sex, besides how often I don’t do it. So, the better question is not how often I do it but how often I don’t do it. I am absolutely detached from women who guy scope. They’ll swoon and comment how hot that guy is and me…nothing. I’m just there, floating around, waiting for the topic to be changed. I remember watching a movie with my best friends, and all of them were swooning over the aesthetically pleasing men in the movie, but I felt absolutely nothing. It was very awkward for me. Not even my own fiance is sexually attractive. What he is is cute and beautiful, both physically and personality-wise, but more so personality-wise. I have always felt bad that my fiance lavishes me with compliments about my physical beauty, like how hot I am or whatever, because I can never return those same sentiments. Instead I call him cute, but mostly when he’s doing something that makes him cute, never cute just by itself. He is cute, of course. And beautiful, which I do let him know on occasion. I also get embarrassed when women are commenting on some physical aspect on a guy they deem sexy. I also get really embarrassed when they talk about their sex lives in relations to how awesome it is or how often they do it or whatever–because I can’t say the same thing. It would be too embarrassing to tell them how little my sex life means to me. I had one friend pity me because I told her I didn’t get multiple orgasms, basically hiding the fact that I didn’t care about getting multiple ones, and that my sex life is miniscule anyway. I also had another friend who told me she and her boyfriend would rip through a pack of condoms in a week or half that week. My friend, when she visited her boyfriend in India, ripped through about seven packs in just a few days. She hadn’t seen him in a while, but needless to say, I was rendered very, very uncomfortable…and speechless. And it was something she took great pride in.

I don’t know how open any of you are about your sex lives, but a lot of people I’ve met are. And it’s overwhelming for me, because I-don’t-want-to-hear-that. But if I tell them to shut up, I’m sure I’ll get called a prude.

Only one person I know outside of the internet knows I’m asexual. And she totally accepts that. She didn’t understand it at first, until she read my post on Tumblr, which I hope you guys will do. It roughly presents the same information.

I also have the bawdiest sense of humor, but mostly because I like to make people uncomfortable by poking fun at our hyper-sexualized society. It’s primarily innuendos, though. No Jim Norton sexual humor. That’s just disgusting to me.

As a final note, I am writing a book with an asexual homoromantic character, but I will be submitting it to a publisher that accepts this type of material: Harmony Ink Press. Of course there are other options for this book, but they are number one on my radar. That’s all you’ll know about the book for now. 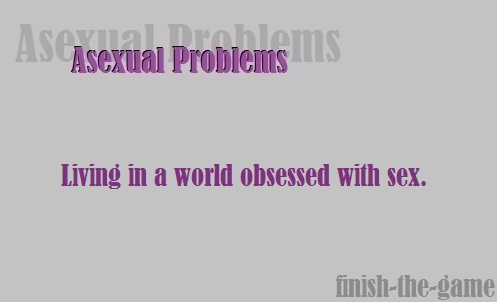 7 thoughts on “Coming Out Asexual”